According to the World Health Organization “antibiotic resistance occurs when bacteria change in response to the use of these antibiotics. Bacteria, not humans or animals, become antibiotic-resistant. These bacteria may infect humans and animals, and the infections they cause are harder to treat than those caused by non-resistant bacteria.” The bacteria’s ability to survive and multiply can occur naturally but the misuse or overuse of antibiotics in humans and animals are the main contributors. When an antibiotic fails, it often leads to use of an even stronger antibiotic. The bacteria’s ability to outsmart a medication is suspected to be the result of the production of biofilm.  The Biofilm Reducing Complex in the Advanced Formula ZYMOX® PLUS Otic works to attack the complex biofilm structure, prevent adhesion, and metabolize its components. 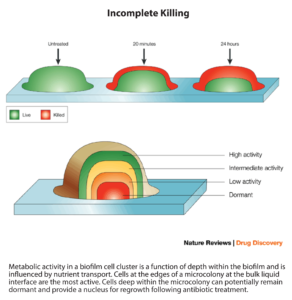 Biofilm is an ill-defined mix of polysaccharides, nucleic acids and proteins encased in a slimy matrix created by microorganisms to house the DNA of the infection.  Biofilm is the suspected culprit for most antibiotic resistance and the reason many pet ear infections are persistent or return.  Due to incomplete killing of cells, bacteria can remain hidden in a complex biofilm even after the infection appears to be resolved, patiently waiting for ideal conditions to multiply and re-infect.  What’s more, biofilm-producing infections are 10x to 100x more resistant to the effects of antimicrobial agents.

The Advanced Formula ZYMOX PLUS Otic features the patented LP3 Enzyme System and the addition of the Biofilm Reducing Complex, which is comprised of four antibiofilm enzymes: mutanase, dextranase, cellulase and beta glucanase.

Disruption of biofilm alone is unlikely to have a major impact unless the microbes within the biofilm are inhibited and destroyed. The Advanced Formula ZYMOX Plus Otic features the patented LP3 Enzyme System PLUS the Biofilm Reducing Complex. When combined the results are antibacterial, antifungal with effective biofilm removal.

Thank you for your interest in Pet King Brands products. At this time, we are not accepting new applications for new Brand Partners.

This website uses cookies to improve your experience while you navigate through the website. Out of these cookies, the cookies that are categorized as necessary are stored on your browser as they are essential for the working of basic functionalities of the website. We also use third-party cookies that help us analyze and understand how you use this website. These cookies will be stored in your browser only with your consent. You also have the option to opt-out of these cookies. But opting out of some of these cookies may have an effect on your browsing experience.
Necessary Always Enabled
Necessary cookies are absolutely essential for the website to function properly. This category only includes cookies that ensures basic functionalities and security features of the website. These cookies do not store any personal information.
Non-necessary
Any cookies that may not be particularly necessary for the website to function and is used specifically to collect user personal data via analytics, ads, other embedded contents are termed as non-necessary cookies. It is mandatory to procure user consent prior to running these cookies on your website.
SAVE & ACCEPT